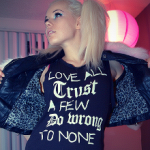 InsaneBlueberry (Liz) is one of my best friends on the internet. She's funny and I just love talking to her and hearing about Color Guard. She's also insane and has rubbed off on me. We met on the TVF and that is also where we made up Ciz. (Pronounced Sizz)

MLH (Mrs.leohoward) is like the sweetest person ever. I love talking to her, it'd probably be more often if it wasn't for out time zones, though only three hours apart. She's great to talk too and she's funny too. Did I mention adorable? Another of my best friends on the web.

Another one of my OTP's. I love both Liz and MLH and it's just triple the fun and love when were all together!

Katy is awesome and fun to talk to, definitely! We're both sarcastic at times and it seems one of our fellow users used to think we were the same person lol. She's a good friend and we talked all the time.

We are strange, and fun to talk to. Just don't push our berserk button.

He's my best male friend and he's awesome. even he is a pervert He is the innuendo king and I am his "padawan". We are the DOTSDOTSCLAN. I FUDGING LOVE VILO!

She's so awesome and an epic troller. She's hilarious most of the time and fun to talk too. <3

"I'M BIG BEN FRANKLIN AND THIS SHAN'T BE PRETTY, LET ME INSTRUCT YOU HOW WE BATTLE IN THE CITY OF PHILLY"

I don't have anything to say soo uh, HIIIII!

Retrieved from "https://victorious-user-relationships.fandom.com/wiki/User:Ciria?oldid=16989"
Community content is available under CC-BY-SA unless otherwise noted.